Nature Saves the Best for Last 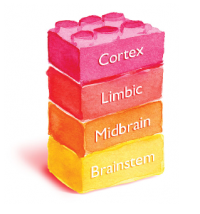 The limbic system is the emotional core of the brain. The cortex forms an outer covering around the brain that accounts for 85 percent of the human brain mass.  The cortex is where reason, logic, and rational thinking originate.  Reading, writing, and arithmetic are cortical functions.  During adolescence, the cortex goes through a major period of growth and change that helps adolescents transition into adulthood.

New experiences will stimulate more brain connections and new neural pathways.  Connections that are not used will be eliminated.  The human brain also gets its final layer of insulation during adolescence.  Myelin, a fatty substance, is deposited on critical brain connections. Myelination increases the speed with which electrical and chemical messages are transmitted throughout the brain.  The prefrontal cortex is the last area of the brain to complete myelination.

Changes in the adolescent brain are not limited to the cortex.  One of the other regions of the brain that is going through a metamorphosis during adolescence and that is particularly shaped by environment and experience is the cerebellum.  The cerebellum not only coordinates certain types of movement but also acts as a support system for other cognitive functions, such as recognizing social cues.  The cerebellum, which has more neurons than any other place in the brain and which continues to grow into the early twenties, appears to be the last area of the brain to mature.

As teens mature, their brains become faster, sharper, and more specialized. They begin to: develop advanced reasoning abilities; expand their capacity for abstract and critical thinking; understand ‘how’ and ‘why’ questions; analyze complex issues; and evaluate alternatives before making a decision.  Although teens have an amazing capacity for learning and memorizing new information, they often experience difficulty with prefrontal cortex functions, such as prioritizing what is important and organizing tasks.  Teens need guidance from adults as they develop these skills.
Teachers and healthcare providers can do a number of things to help teens while the prefrontal cortex is still developing: